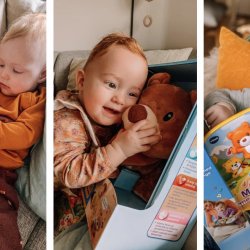 Anders and I have had triplets and a toddler for over a year now. How has this affected our relationship?

When we found out about the triplets, we decided in the car back from the hospital that we could manage this. And we both felt that our bond grew even deeper from that moment on. Now we were a Team with a big T – raising these 4 kids would be a team effort for life.

We are both structured and pragmatic persons, which meant that we immediately started researching to figure out what we needed to do to make everything work out well. We are also both easily adaptable to new situations and we both take responsibility in getting things done, which have been and still is very important in our life as parents to 4 kids three years and younger.

Shared responsibilities is a key word at our house. We shared the parental leave almost 50-50 for the first 11 months (I was a little bit more home alone with the babies), and we were both involved in every aspect, except for breastfeeding and expressing, of course. We also always share chores such as taking in and out of the dishwasher, cleaning up and tidying (well I tidy a bit more ;-)), while I do the laundry willingly and he fixes practical things on the computer and so on. We have an agreement that we don’t sit down on the couch in the evening before the house looks clean again. So everything just kind of floats, which means that there is no fighting over who does most at home. He also knows exactly how hard it is to be home with the kids, so there is no disagreement about the fact that the hardest work is being at home. (We both have calm office jobs.)

Our main problem and source of bad mood during the many many weeks of little and very interrupted sleep, has been that we don’t always understand each other, especially in the morning. Since we are both B-persons and night owls that get to bed way too late, we also often need a while to really wake up after getting out of bed. I do not have the energy to talk out loud when I am tired, and in addition to that I already have a tendency to mumble (and be grumpy in the morning, haha). Anders on the other hand speaks Danish, which is a language that has a pretty indistinct and floaty sound to it to us foreigners. And both of us may not always concentrate enough on listening properly. So when you have to repeat yourself 1-2 times, it gets annoying, and the tension increases and aggravation appears. Some times we have actually shouted out things to make sure that the other one hears it, like we were talking to a 100 year old person.

It is pretty funny that our biggest problem has been that we literally have not understood each other. Seing it from the outside it has made for some pretty humorous situations between us, like a scene out of a theatre comedy – or like two fairly demented persons at an old people’s home having a nightly conversation. It has also often ended up in us laughing at it as well.

Laughter has been the cue to keep us going this last year and a half. We are both pretty relaxed persons, and are lucky not to have any real issues with nerves, anxiety, anger or depression, which makes life a bit easier when you have many small kids. So when we have been in really intense situations, like a lot of babies screaming at the same time and so on, we have laughed a little to each other of the craziness of it all, and just tried to solve the situation as effectively as possible.

A pattern that I see in a lot of relationships, and very much in our own, is that Anders is super calm while I am more up and down in mood, energy and temper. (Which I think has a lot to do with the female cycle and hormones, but that is another story.) I can also easily wind myself up to maximum stress, and almost hyperventilate if I am late for something, if there is too much pressure to perform or deadlines that are too close. But Anders just stays completely calm, and never gets angry even if I am out of line. I always know when I am behaving unreasonable, and always admit that and say I am sorry for the way I behaved after the storm has calmed. We are not the arguing type any of us, but I am very direct with expressing feelings or concerns I have, and Anders has become more open as well. And both of us are good at taking criticism. All this means that we almost never argue. I work with myself at not nagging and bickering, and to not take my inner irritation out on him. I may not always succeed, but at least I am very aware of it.

Another thing that is important for us and our relationship is to be generous with each other. That mostly means letting the other one do stuff outside of the house without making it a big deal. Also acknowledging each other’s needs and personal space. We are not jealous types, which makes all this easier. On the other hand we have mostly focused on being together as a family since Mikael was born, so we do most things together anyway. At least for now when the kids are small and dependant on us. I addition to that, we like to do the same things in our free time, and that makes everything way easier. (Except for flea markets, Anders hates that. Haha.)

But our relationship has of course changed a lot since the trio arrived. We are always super busy, and almost never have time to relax. There is always things that need to be done, or children we need to attend to. In the evening there are chores to take care of and work to be done. We are both freelancers so we have a mutual understanding of what that requires, but it is a little too much at the moment. We know that we still are in a state of emergency, and we both feel that we do not have much extra energy to give. Which is something that of course affects our roles as husband and wife. This is something we are fully aware of, and talk a lot about. And we both look forward to calmer times when we can prioritize our relationship more than we do now.

Until then we make sure to watch some episodes of a TV-series we like several times a week and to have the occasional date night, either at home with all screens turned off or out on dinner, a concert, etc. Then we can have deeper talks than we normally do, and put all focus on each other. Because in everyday life the communication has really changed since the triplets arrived. Most emojis are gone in the text messages between us, and many of our conversations are about the kids or practical issues.

But in the end we still are pretty attentive towards each other and remember to give compliments, show physical attention and make out in the kitchen now and then, which I think is very important to keep the sparks alive. We feel secure in our relationship, and talk about how we look forward to firstly having our own bedroom again, and secondly to when the kids are older and more independent and him an me can start doing fun things together on a regular basis – just the two of us. In the mean time we try to see raising our children as our biggest girlfriend/boyfriend-project, and try to find happiness and fulfillment together through that. 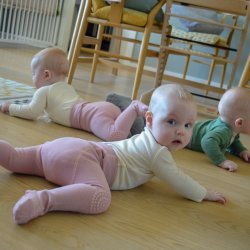 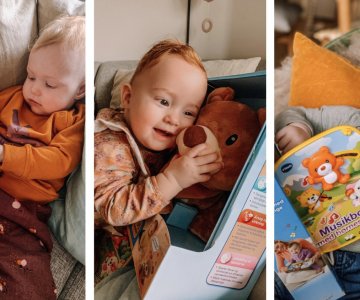 [Annonce (AD) for Vtech toys] The triplets are now 14 months old, and crave new challenges and stimulation all day long. So it was really about …
Read more