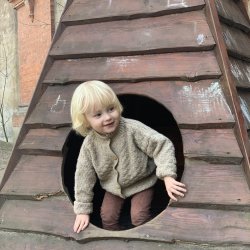 Næste indlæg
He was lying on the changing table and looking directly at me and I thought to myself: Who is that

April 9, 2018 I got the biggest shock of my life at the 12-weeks ultrasound at Hvidovre Hospital.

“There are two in here!” said the nurse, as she moved the device over my little bump. And before I could take in what she had just said, she continued:
“And here is one more!”

My boyfriend and I had joked about there being twins since I already had a noticeable bump – and because my grandmother had predicted that I would have twins – but we thought that it was just the case of the belly getting big faster when you are pregnant for the second time. We had planned for a future life with two children and had a newly purchased 2 bedroom apartment in central Copenhagen, a brand new hybrid SUV with isofix for two car seats and several planned trips; plane tickets and airbn’b apartments were already booked for a New York trip in May and a holiday in the south of France in July with two other couples with children. But then *BOOM!* – life gets thrown in my face.

And it really felt a bit like a bomb went off in that tiny ultrasound room. The wind got knocked out of me and I started crying. I saw myself from the outside and thought: How can this happen to US? It felt like we were in the middle of a movie scene. The possibility of having triplets had never even crossed our minds. I mean, who gets triplets? We didn’t know any triplets, didn’t know of anyone who had it and it had never been on our radar at all.

Then followed a crazy stream of thoughts:
– How will I be able to carry 3 babies? It must be absolutely terrible! (A quite panicky feeling, especially when you have been pregnant before and know how it feels the last weeks up to due date)
– What about the babies? Will they survive this without being harmed? Or even worse: Will they die?
– Mikael! Poor little Mikael will now get three siblings at once. How do we get time to take care of him in all this?! Our beautiful little first-born who will barely be 2 years old when they arrive?!
– Can we stay in the apartment we just bought? How will we make room?
– What about all the trips we have booked and are looking forward to? Can I go to New York and celebrate Anders’s 40-year birthday?
– How will we ever get to travel anywhere with 4 small children? Can we even go outside and do some of things we love to do like eat at cafees, go to exhibitions, concerts, etc?
– How will it be having three babies at the same time? Three 1-year olds, 3-year olds, 8-year olds, 12 year olds, 14 year olds? In addition to Mikael? Help!
– Why did this have to happen when I just moved away from my home country and my mother, the rest of the family and all my close friends?!
– What kind of equipment do we need? Will I be able to attend a mother group and maybe get to know others living nearby like I had imagined?
– Will anyone invite us anywhere ever again when we are a gang of 6?
– There are three babies in my belly!!!!

I looked at Anders and the crying turned quickly into laughter because of the absurdity of it all and how surreal it was that WE had ended up in this situation.

While I had all the these thoughts, he only had two: What about the apartment?
Noooo, we have to sell the car!!!

The rest of the ultrasound session I switched between breaking out in hysterical laughter and hysterical crying, but in between all the breaks we had to take because I was shaking so much, we clearly saw three babies kicking around on the screen in front of us. And they were so cute! Imagine: 3 perfect babies at once. In perfectly normal sizes and with perfect heartbeats. And my heart melted for these babies – that were ours. We were going to be a family of 6. Imagine all the love!

And then I cried a bit of joy as well.
For a few seconds at least. 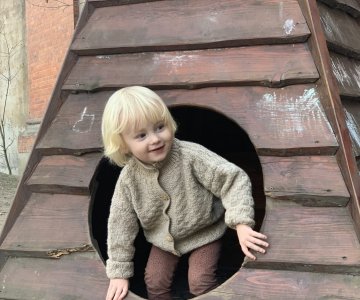 He was lying on the changing table and looking directly at me and I thought to myself: Who is that beautiful little boy? With shining …
Read more